Albert Einstein was not in the least joking when he called Kurt Gödel “the greatest logician since Aristotle.” Gödel achieved his lasting renown for his remarkable Incompleteness Theorems, which he announced in 1930 at age 24, which demonstrated that mathematics can contain statements that are true yet unprovable. “The discovery of the greatest mathematical truth of the century,” was the citation accompanying Gödel’s honorary doctorate from Harvard University in 1952. 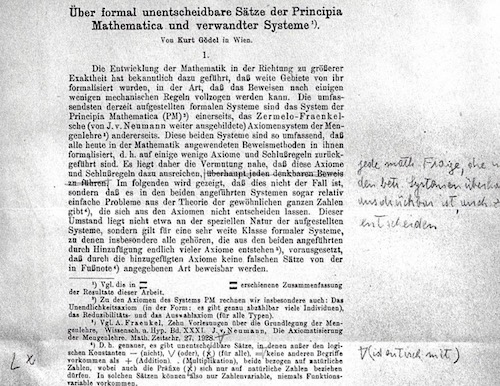 The Incompleteness Theorems continues to fascinate mathematicians, philosophers, and computer scientists with the questions it raises about artificial intelligence, the nature of truth, and the limits of human knowledge.

Gödel’s life, from his birth in what was still the Austro-Hungarian Empire in 1906, to his tragic death in the grip of paranoid delusions in Princeton in 1978, encompasses a remarkable twentieth-century story of genius and tragedy. He was a first hand witness to the searing destruction of Vienna’s incomprable intellectual world of the 1920s and 30s under the rising tide of anti-Semitism and anti-liberalism that made it impossible for him, like thousands of other Austrian scientists and artists, to remain in the place that had been a world leader in philosophy, physics, mathematics, and culture. Though Gödel was not Jewish, he had many Jewish friends and his very interest in mathematical foundations brought him under suspicion in the twisted Nazi ideology that equated modern scientific and philosophical thought, including Einstein’s Theory of Relativity, Schrödinger’s quantum mechanics, and his mentor Moritz Schlick’s logical empiricism, with “Jewish science.”

He twice spent semesters as a visiting scholar at Princeton’s newly founded Institute of Advanced Study in the 1930s, and in 1940 in a dramatic hair’s breadth escape from Nazi Germany that took him and his new wife on a nearly round the world journey across Europe, Sibera, and the Pacific, he arrived in Princeton where he remained the rest of his career.

At the Institute he finished his second great work in mathematics, his proof of the consistency of the Axiom of Choice and the General Continuum Hypothesis, and embarked on a novel solution to Einstein’s General Relativity equations producing a world in which absolute time does not exist and time travel is even theoretically possible.